The original 5 models were developed for the June 2000 "Columbine P.S." paper on education, on this web site.   These models are for use in conflict resolution, to enable the establishing of dialogue between all stakeholders by enabling them to conduct their own dialogue marathon:  8 at the macro-societal and institutional level, and 8 at the micro-individual level for use in face-to-face encounters, whether the other individual(s) does or does no represent a larger institution of society.  These models can be used to avoid what is often a disastrous swing of the pendulum, in order to enable all involved to use what is described below as a “calculus of meaning” and a “calculus of pain” to assist in their deliberations.

As before, the models are for use in conflict resolution, to enable the establishing of dialogue between all stakeholders by enabling them to conduct their own dialogue marathon:  9 at the macro-societal and institutional level, and 9 at the micro-individual level for use in face-to-face encounters, whether the other individual(s) does or does no represent a larger institution of society.  These models can be used to avoid what is often a disastrous swing of the pendulum, in order to enable all involved to use what is described below as a calculus of meaning and a calculus of pain to assist in their deliberations.  Our list began with five total. Now we have identified 9 each of macro and micro models:

Regarding the 18 models of conflict resolution

These 18 show how we can both understand conflicts and develop workable resolutions for solving them, whether personal (micro) or between larger aggregations of individuals in the institutions and nations of society and the world (macro).

Peter Berger has coined, among many highly useful terms, this pair: "historically specific conservatives" (those of the left or right who would usher in their desired type of society and then freeze it in place) and historically nonspecific conservatives" (those who accept change and make haste slowly).  I find them so much more useful as a way of looking at the ideological landscape (as it cannot be avoided).  As I also state on those pages, this and another pair of Berger's analytical word tools,"calculus of meaning" and "calculus of pain", are, in my judgment, the critical one- two punch of analysis and conflict resolution.  They are two of the four key organizing principles for dealing with such conflict resolution, along with the concepts of "lists/recipes" and collaboration.  "Recipes" comes from Berger as well, through Alfred Schutz.  All of which I would make a part of what Cassidy call the politics of love, "which has to be both the umbrella over and foundation under all discussions and interactions if true conflict resolution is to be achieved in a way that love and justice pervades and is received and perceived by both sides."  These models are of particular importance and relevance in the continuing conflicts in the world today, whether by nation-states or independent groups dedicated to changing society through violence.

In her book, The Human Condition, the Jewish scholar Hannah Arendt says we keep chaos at bay by keeping promises and that we deal with the irreversibility of our words and deeds through forgiveness, that forgiveness and reconciliation are not the provenance of Christians, although Jesus emphasizes it more than anyone, but rather that both are necessary because of the "human condition."  To forgive in order to be reconciled requires loving.  Love is what is missing in the Middle East with the Oslo Accords.  Without love, it will ultimately fail.  Love and reconciliation are a necessary part of the human condition.
Macro models 2, 3 and 5 show love as a key ingredient for macro conflict resolution.  Models 1 and 4 suggest that its lack prevents resolution.  There is the evidence of another contemporary, long term, unresolved, unreconciled, loveless conflict:  Korea.  The unsuccessful threatening Cold War rhetoric of Washington has not worked.  The recent summit between North and South Korea was brought about by South Korea's Kim Dae Jung, using a mix of Christian compassion and Confucian sincerity.  If this continues, this country could also be reconciled, using the "politics of love."

Those interested in education in any town or city, are urged to think beyond the conflict resolution process at the institutional level (the 5 macro models above) and think also of the conflict resolution process within their own minds between their "better" and "worse" selves as well as between themselves and those they must resolve conflicts with face to face, at home, at work, or at school (the 5 micro models below).  A recommended starting place is to consider either the adoption of one of the following models or the development of another model taking elements from any of the other models, whether approached in terms of outcomes or in terms of personal procedures to follow.  These micro, face-to-face relationship models can enable people to approach different tasks using the terminology of the field of conflict resolution, enabling the kinds of effective inter-personal relationships that will foster, support and sustain task completion. 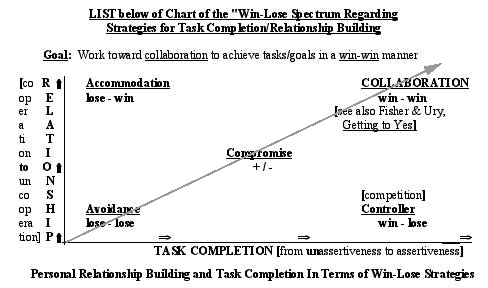 LIST below of chart of the "Win-Lose Spectrum Regarding Strategies for Task Completion/Relationship Building
Goal:  Work diagonally toward collaboration to achieve tasks/goals in a win-win manner

The previous chart was adapted by Peter Jessen from the model presented by John Conhere who in tern presented his adaptation of the model of Ken Thomas, in Conhere's "Peer Mediation" presentation, Fridley Middle School, Fridley, MN, Jan. 19, 1993, and used by Peter Jessen in his presentation of "THE MOTIVATION ZONE:  Heroes at Work with Heroes in Training:  Background, Rationale and "Curriculum' For Parents & Kids,"  before a meeting of the Wilson Cluster Parent Connection Meeting, Wilson High School, Portland, OR, March 11, 1996, and before the Wilson High School Leadership Group in December 1998.

Key to task success is to understand how to meld each stakeholder's and stakeholder group's plans, agendas and "to do lists" into a recipe which includes the concept of collaboration.  Following Meichenbaum's Facilitating Treatment Adherence:  A [medical] Practitioner's Guidebook, by Donald Meichenbaum and Dennis C. Turk;  and Meichenbaum personal statement to Peter Jessen) "collaboration" is further defined as that which must be understood within the context that no collaboration can take place unless everything is negotiable.  "Non-negotiable" means conflicts cannot be resolved and collaboration cannot be achieved.  Without collaboration on negotiable items, there can be no Win-Win.   Each group must drop its Wizard of Oz-ian curtains.

Referring to Chart: Left to right = ascending degree of task completion.
Bottom to top = ascending quality of relationships.
Avoidance (not face) = lose -  lose.
Accommodates (giving in) = lose - win, as high level of task completion is sacrificed for the sense of relationship.
Controller = win-lose is at the other end of the spectrum is the (where high task completions are obtained by sacrificing relationships).  And although compromise has some value, its half win, half lose (not very satisfying to either).
Collaboration is the one that is highest in both relationship building and task completion.  Collaboration is the only one which is win-win and the best for long-term win-win.  BUT, collaboration only works with that which is negotiable.  Caveat:  "consensus trumps collaboration" ("consensus leadership" allows one or two stop the rest in their tracks). 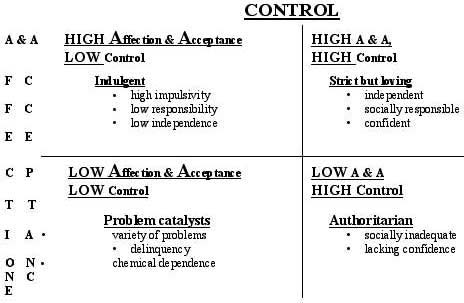 Indeed, Part III of her book The Shelter of Each Other is entitled:  "Solutions:  What will survive of us is love."  In this she is in agreement with Cassidy (Macro model #3).  The following matrix responds to Mary Pipher's question:  "Under what conditions will young men and women flower and grow?"

They create habits.  These habits are said to follow the recipes needed for success.  People seek "recipe knowledge"  (Schutz's phrase).

It derives from three concepts:


A "P.S." to these 8 macro and 8 micro models for conflict resolution

As Berger further points out, social scientists talk about the reality that "every society has its own corpus of officially accredited wisdom, the beliefs and values that most people take for granted as self-evidently true."  In terms of education, there are multiple realities involved, each viewing education differently, from the unique position of its own prism of reality.  This was not the case "in the old days", when, as Berger writes:  "Every human society has institutions and functionaries whose task it is to represent this putative truth, to transmit it to each new generation, to engage in rituals that reaffirm it, and sometimes to deal (at least in words) with those who are benighted or wicked enough to deny it."  This used to be an easy task when there was a dominant set of beliefs and values that everyone took for granted.  But modern society is pluralistic, with multiple realities or worldviews that change, hence the saying of W.R. Inage, that "he who would marry the spirit of the age soon becomes a widower."

There are two other organizing principles which recommend for consideration by both the macro models and the micro models, both suggested by Peter Berger.  The first is a "calculus of meaning" and a "calculus of pain," from his book Pyramids of Sacrifice:  Political Ethics and Social Change, in which he suggests that policies should be those which provide the most meaning and the least pain, and that each calculus include a list of outcomes that are not desirable, in order to avoid the mistake of believing because the intent is pure, so will be the outcome.

Secondly, adapting from another analytical framework of Peter Berger, it is recommended that each of the stakeholders in the discussions that ensue review whether or not they are arguing from an ideological position or not, whether they are actually flexible with their thinking, and to ascertain whether or not they are being "historically specific conservatives" or "historically non-specific conservatives."

This eliminates the argument over content labels (liberal vs. conservative, Democrat vs. Republican), and instead focuses on the process.  In this way, it can be state that both the radical left and the radical right are, hopelessly and romantically, historically specific conservatives.  The radical left looks forward to a future putative utopia which, when reached, is to be frozen in place, never to change, because utopia has been achieved.  The radical right looks backward to a putative golden age which it wishes to resurrect, after which it too is to be frozen in place, as the golden age has been retrieved.

The historically NON-specific conservative recognizes yet resists the impulse to fine a "good place" and to then rest and keep it that way, but also recognizes that it is better to make haste slowly, and that as most historical actions have unintended consequences, one needs to be slow in assuming that a proposed policy or action is the solution.  The Spanish Civil War, which, like all wars, was a conflict "full of moral ambiguities, with unspeakable brutality on both sides," in which a monument has been erected to the million who died, a monument placed inside a mountain not far from "The Valley of the Fallen".

Berger's chilling words about this should give us all pause and inspire us to be "historically non-specific conservatives":   "And the Spain that is now emerging has nothing to do with what either side fought and died for." Or, as Cassidy put it in his book, "Apartheid and all its works will pass away.  So will every answer which replaces it, whether better and nobler or yet more sinful and worse."